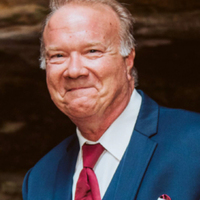 Thomas Joseph Karpus, 64, of Plano, IL passed away on November 14, 2021 surrounded by his loving family. Tom was born on August 23, 1957 in San Diego, California to Thomas and Miriam (Ulrich) Karpus. Tom married his love, Diane (Sherman) Karpus on November 3, 1984. The two were happily married for 37 years. They lived a wonderful life together and were blessed with three beautiful daughters.

Tom’s greatest joy in life was spending time with his wife, daughters, son-in-laws and grandchildren. He was a die-hard White Sox fan and loved going to Comiskey. His passions included fishing in Canada with his uncle and cousins, collecting guns, and playing catch with his loyal dog, Mack. Tom took great pride in his work as an architect and worked for the City of Plano as the Director of Building, Planning and Zoning for 19 years.  He enjoyed contributing to his community serving on the Plano Library Board, helping young men on their Eagle Scout projects and coaching his daughters and their friends in softball throughout their childhood.  His greatest disappointment was that all three of his daughters married Cubs fans, and he made it his personal mission to bash the Cubs at any opportunity. Tom will be dearly missed by all who knew him.

He is preceded in death by his parents; brother; grandparents; father-in-law; and best friends.

Visitation will be held on November 19, 2021 from 3:00 pm to 8:00 pm at Beverage Family Funeral Home, 104 Terry Street Sandwich, IL 60548. Funeral service will be held on November 20, 2021 at 10:30 am at St. Paul’s Catholic Church, 340 W Arnold St, Sandwich, IL 60548 with a graveside service to follow at St. John’s the Baptist in Somonauk, IL. A celebration of life to follow, White Sox attire is in encouraged. Funeral arrangements were entrusted to Beverage Family Funeral Home. Online condolences may be made at www.beveragefamilyfh.com.

To order memorial trees or send flowers to the family in memory of Thomas Joseph Karpus, please visit our flower store.