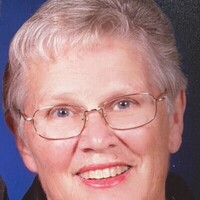 Sharon was preceded in death by her loving husband of 59 years, Eugene Edward.

Sharon and Eugene were married in Bensenville, IL on April 11, 1959, in the town where she grew up.

They lived and raised their family in Schiller Park, IL for forty-one years and retired to Sandwich, IL in 2004.

Sharon worked at East Leyden High School on the clerical and library staff and created braille materials for the blind. She was a talented piano player despite being afflicted with polio as a child during the War. Mom was a fierce Scrabble opponent, voracious reader and crossword puzzle worker. She was a natural baker with a life-long sweet tooth. Her desserts were requested by many and generously donated to her church and community. Sharon was a generous, thoughtful, humble and determined lady who will be missed by many.

In lieu of flowers, memorials may be donated to Transitions Hospice in Naperville, IL.

Sharon and Eugene’s remains will be co-interred at the St. Paul Catholic Cemetery in Sandwich, IL at a later date.

To order memorial trees or send flowers to the family in memory of Sharon M. Chropkowski, please visit our flower store.