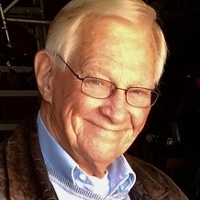 His father, Russell, was a Lutheran pastor and his mother, Dorothy, was a teacher. He was the oldest of 5 and graduated from Augustana Academy, Sioux Falls, SD as the class president of the class of ’54. He enlisted in the USMC and served as a Morse code operator mostly in the Mediterranean Sea off of Greece. He graduated from Augustana College in 1961 with a degree in business.

He married Anita Rasmussen in Sioux Falls, SD on January 22, 1959. Richard began his career in men’s clothing, then insurance, which led him to the Chamber of Commerce. Over his career, he served as the manager of the Chambers of Commerce in Bellevue, NE, Moorhead, MN, South Saint Paul, MN, Wausau, WI, Bartlesville, OK, and Brookings, SD. Richard was the state president of the Nebraska Jaycees 1970-71. He and Anita retired to Sandwich IL in 2007, where he was active in the Wildwood Homeowners Association.

He enjoyed putzing in the garage, going to Menards, making woodworking projects, and attending games and performances of grandsons Matt and Jack, who live nearby. He will be missed.

There will be a Celebration of Life Saturday, August 10 from 1-4 p.m., with a time for sharing at 2:00 at the Wildwood Community Center, 1 Birch Drive, Sandwich IL. Anita asks attendees to bring pictures to share.

To order memorial trees or send flowers to the family in memory of Richard Alan Olsen, please visit our flower store.