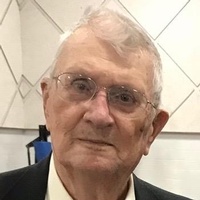 Myron E. Redden 89 of Sandwich, IL. passed away May 23rd at Northwestern Hospital in Sandwich. He was born February 27, 1930 in Tuscola, IL., the son of William Thelby Redden and Sarah Irma (Brown) Redden.

Myron set two goals for himself; one was attain a pilots license and fly a plane (at age 15 he flew a plane solo) and the other was to be a builder.

He was employed at Caterpillar Tractor Co. first in Peoria and later the Aurora Plant for 15 years.

He started Redden Bros. Construction with his younger brother. When his brother chose a different path Myron continued the business with his son Les and together they built many residential homes and commercial building.

Myron and Mary retired to Punta Gorda, FL. where they spent ten years and met many new friends before returning to Sandwich

He was preceded in death by his parents, two infant brothers and sister Dorine Catlin

No public services will be held, Myron will be laid to rest in the family cemetery in Tuscola, Illinois.

To order memorial trees or send flowers to the family in memory of Myron Earl Redden, please visit our flower store.