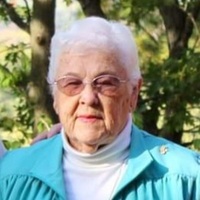 Lorene (Sis) Kinney, 95, of Sandwich, IL passed away on May 20, 2021. She was born in Clarence, IL. She married Gene (Sandy) Kinney on October 4, 1945. She was very proud of her work at Chanute Air Force Base as the Secretary to the General in charge of Medical Operations for the European Theater in WWII. Lorene also worked as a bookkeeper at several places including St. Joseph’s Health Resort in Wedron, Il and for Dr. Castro and Dr. Godin in Ottawa. Sis and Sandy loved traveling in their various campers and everyone loved her homemade bread!

She was preceded in death by her parents, Orville and Zella; One sister, Pauline Hess; And two brothers, Gene and Phil Watson.

In lieu of flowers, memorials may be directed to Fox Valley Older Adults in Sandwich, IL.

To order memorial trees or send flowers to the family in memory of Lorene (Sis) Kinney, please visit our flower store.