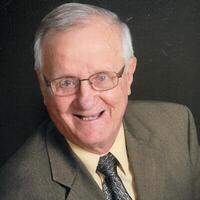 Larry Phillips was born on June 2, 1929 in Chicago, IL to Charles and Ruby (Bartlett) Phillips. He married the love of his life, Mary Ann Reimann on March 12, 1955, at the Federated Church in Sandwich, IL.

Larry was a longtime dedicated member of the Federated Church of Sandwich, where he was married and served as both a Deacon and Trustee. He faithfully attended men’s Bible studies, mission trips, volunteered for Meals on Wheels, and was coffee maker extraordinaire.

Larry was a loyal member of the Sandwich Lion’s Club for 52 years. He was very proud of the work they did and his perfect attendance.  He delighted generations of children for over 40 years through his operation of Grandpa’s Pumpkin Patch.  He was a lifelong Cubs fan, who attended the 4th game of the 1945 World Series, and joyfully celebrated their 2016 World Series win.

Visitation will be held on Friday, December 3, 2021 from 4:00 – 7:00 pm at the Beverage Family Funeral Home in Sandwich, IL. The celebration of Larry’s life will be held on Saturday, December 4, 2021, at 10:00 a.m. at the Federated Church in Sandwich, IL. Following the celebration, a graveside service will be held at the Oak Mound Cemetery in Somonauk, IL. In lieu of flowers, donations may be made to the Federated Church. Funeral arrangements were entrusted to Beverage Family Funeral Home. Online condolences may be made at www.beveragefamilyfh.com

To order memorial trees or send flowers to the family in memory of Larry Phillips, please visit our flower store.