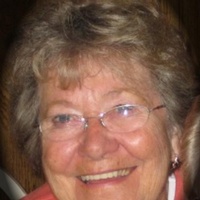 Judith (Judy) Wuchte, 81, of Lincolnshire Place in Sycamore, IL, formerly of Plano, passed away on Sunday, March 24, 2019 at the DeKalb County Rehab and Nursing Center after a courageous battle with Lewy Body Dementia.

Judy was born in Stavanger, Norway on July 28, 1937, the daughter of Odd and Assa Jakobsen.  She immigrated to the United States when she was 16 and moved to DeKalb, Illinois where she met Albert Wuchte.  Judy and Al were married on May 11, 1957.  Shortly thereafter, they made their home in Plano, IL where they started a family and spent 33 happy years together until his passing in June, 1990.  They owned and operated Plano Paper Place for 13 years.  Judy was employed by Eagle Foods, Nalco Chemical, the City of Plano and retired from the Plano School District as an aide at P.H. Miller School.

Judy loved music, camping, traveling, cooking Norwegian food, and all family traditions and celebrations.  She especially enjoyed weekend camping/fishing trips and extended family vacations to Kentucky Lake, Mount Rushmore, Niagara Falls and Canada.  She also enjoyed her trips to Hawaii and Alaska and a trip to Norway with her brothers.

Judy is survived by those who loved and cared for her, including her three daughters Kathy (Steve) Benoit of Plano, Anne Marie (Rod) Jackson of Channahon, and Barbara (Adrian Travis) Wuchte of Aurora, and devoted companion Einar Schavland of DeKalb.  She leaves behind her loving grandchildren to cherish her memory: Rachel (Garry) Klemm, Ashley (Tony Massih) Cusimano, Al Benoit, Anna (Ryan Borbely) Cusimano and Maggie Benoit.  Judy is also survived by her brothers Reidar (Christine) Jakobsen and Edward (Sharon) Jakobsen, special sister-in-law Esther Wuchte, Albert’s brothers and sisters and their families, many nieces and nephews and friends.

The family would like to sincerely thank the loving and devoted staff at Lincolnshire Place, Heartland Hospice and DeKalb County Rehab and Nursing Center for their compassionate care.  Judy will be greatly missed by all who knew and loved her. In lieu of flowers, donations may be made to the Levy Body Dementia Association, Alzheimer's Association or charity of donors choice.

To order memorial trees or send flowers to the family in memory of Judith (Judy) Wuchte, please visit our flower store.