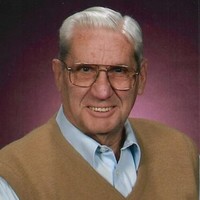 On Sunday, March 15, 2020, John Ruszler was received into eternity by his heavenly Father.  He was “one of a kind”, a fighter to the end, and loved dearly by his family.  John was preceded in death by his wife of 70 years, Florence Ruszler; brother, Myron Ruszler; sister, Rosalie Moore, and parents, Lloyd and May Ruszler.  He leaves behind children Cindy (Jim – dec.) Sullivan, Mike (Bonnie) Ruszler, William Ruszler, Kathy (Len) Perretta; brother, Paul (Diane – dec.) Ruszler and sister, Merza (Frank – dec.) Dawson, 12 grandchildren and 10 great grandchildren.

John Ruszler, born February 14th, 1924, lived a long, full life.  As a son he grew up on Loma Lawn Dairy in Terre Haute, IN, at a time when milk was delivered by horse drawn carts.  He and his family lived through the Great Depression and experienced the loss of their home by fire 2 times.  He served proudly in the Navy from April 13, 1944 to May 8, 1946.  He married shortly after returning home and began college at Purdue University, but not without being interrupted to come back to the farm and help when his own father was taken ill.  He returned to Purdue and completed his Bachelor’s degree in agriculture.

John knew the value of hard work for both family and friends.  He served in his community on the Somonauk volunteer Fire Department and also a PTA officer in 1963 .  He was a charter member of Plano Christian Church (now 7 Mountains Church) for over 50 years and also served on the Church Board.  You could probably ask numerous farmers in the area about him and they would remember all the years he managed the grain elevator in Somonauk.  He especially loved it when he had a chance to help out in the fields.

Nearly a century has been filled with memories.   Some of them joyful, some tearful, some of difficulties, but all of them are filled with grace.  He will be greatly missed, yet  hope is in knowing we will meet again;  no more crying, no more sickness,  no more pain – forevermore, together with Christ!

Due to restriction of the current pandemic, a private service for family will be held at Beverage Family Funeral Home in Sandwich, Illinois, on March 25, 2020.  In lieu of flowers, donations may be made to the following charities: North Burma Christian Mission, 7 Mountains Church (formerly Plano Christian Church) or Joliet Area Community Hospice.  Donations may be sent directly to the funeral home with a noted designation “in honor of John Ruszler”. Please mail to the Beverage Family Funeral Home 104 Terry St. Sandwich, IL 60548

To order memorial trees or send flowers to the family in memory of John Melvin Ruszler, please visit our flower store.