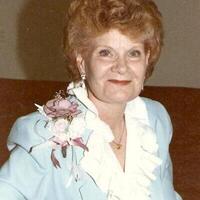 Joanne Marion Becker came into this world November 28th, 1931. She received her homecoming on July 15, 2021. She was a (twin) daughter to her parents, Fredrick & Genevieve Buri.  Her childhood years were shared with her siblings, Charlene, (twin-sister) Jean, brothers, Fred Jr. & Richard.  As a teenager working in a record-distribution warehouse, she overheard the immortal classic song, “In The Garden.” The words of the chorus began to make her question her relationship with God!…The chorus went like this,

In Mother’s words, she recalls asking God,… “God!” “Do you really walk & talk with Mankind?” Within the next year, at (17) in 1949, she would discover the man who became her husband for 68 years until his Home-going in 2017. Gerald Becker, had a Praying Mother, & Grandmother that introduced that little “Red-Headed, Joannie” to the Savior Jesus Christ!

Gerald & Joanne started working as Youth Ministers in the early 1950’s in a small Pentecostal church in Aurora.   Sensing that God had more for them, they opened up a “Pray & Bible Study” service in their Home in Oswego, IL… until God opened another door in the basement of a saints home in Aurora, until it was too full to continue there.

It was then that both of them decided to Spiritually venture out.  Joliet, IL. became the place of their first store-front church sharing the same building with a local bar.   Dad & Mother then pursued an old run-down schoolhouse located on Chicago Ave. in Joliet.

They worked endlessly to clean it, and fix it up for their first service in 1960.

At that time, Mother & Dad had the privilege of being asked by the great Missionary Evangelist, T.L. Osborne to come and work with them on foreign soil.  Dad & Mother declined the great offer, because they sensed God was calling them to Aurora, IL.

In 1964, on an Easter morning, in an Elementary School on the Eastside of Aurora, with 200 chairs set up, Dad & Mother held service with 11 people.

The call for Aurora was strong, and they moved to 900 E. New York St. until 1972, then God opened up to them on Easter Sunday,

Faith Tabernacle Church, that they Pastored together until they turned the ministry over to their 2nd son Jeffrey in 1985.

Joanne also worked, and was known throughout the World to many in the Ministry as the Secretary of a Christian based organization known as Anchor Bay Evangelistic Association.  There she acted as Secretary for the (five-fold-ministers) that were apart of that world-wide Christian Organization for over 30 years!   It would be common to see Mother with a phone under her ear, and a typewriter clicking off information given to her.  Let me add, Joanne Becker was a licensed ordained Minister of the Gospel!  And she could Preach!

She had an ability to pull her audience in with love & excitement for the things of God.  She always conducted herself as a Lady!

She always had a beautiful Smile and a Timely word of encouragement for everyone.

We want to give special thanks to Joslyn Imthum & Diana Sauer for their care of Joanne the last couple years of her life.

In lieu of flowers, memorials and donations may be made to Rejoice Ministry, 6120 N. Harlem Ave. Chicago, IL 60631 and/or Impact Church of Aurora, IL.

Visitation will be held on Monday, July 19, 2021 from 6:00 P.M. – 9:00 P.M. at Beverage Family Funeral Home, 104 Terry St. Sandwich, IL 60548. Funeral service will be held on Tuesday, July 20, 2021 at 11:00 A.M. with a visitation 1 hour prior to service at the funeral home. Private Interment will be held at Lincoln Memorial Park in Oswego, IL. Funeral arrangements were entrusted to Beverage Family Funeral Homes. Online condolences may be made at www.beveragefamilyfh.com

To order memorial trees or send flowers to the family in memory of Joanne Marion Becker, please visit our flower store.