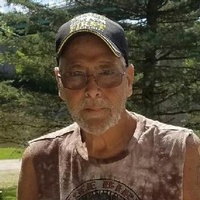 Jim Leonard Henry 64, of Ottawa, Il. passed away on February 8, 2018 at OSF St Francis Hospital. He was born on April 12, 1953 to Paul and Audrey (Bousell) Henry in Mendota, IL. He was a truck driver all his life. He enjoyed boating, fishing, big supported of the 2nd amendment, collecting guns and enjoyed shooting, and working on cars. He loved his dogs which they (Jim and Linda) treated like their children. He is survived by his wife Linda, his daughter Pam Payne, his brothers, Sonny (Sharon) and David (Janet) Henry, and his 3 grandchildren. His mother in law; Pearl Beverage, brothers in law; Roger ( Melissa ) Corbitt, Robert ( Julie ) Corbitt, Mike ( Jodie ) Beverage, sisters in law; Kathy ( George ) Kalina and Karen ( Dave ) Leifheit and several nieces and nephews. He was preceded in death by his parents, and his brothers Jack and Orville Henry, father in law; George Beverage and sister in law; Myra Sue Beverage. Funeral service f will be held on February 14, 2018 at 11:30 a.m. at Beverage Family Funeral Home with Matthew Jones officiating. Burial will follow to Restland Cemetery in Mendota, IL. Visitation will be from 9:30 -11:30 a.m. prior to the Funeral service. Arrangements entrusted by Beverage Family Funeral Home
To order memorial trees or send flowers to the family in memory of Jim Leonard Henry, please visit our flower store.