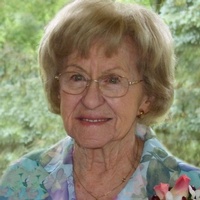 Born the eldest of 3 sisters (Helen, Hazel, Martha) on October 26, 1917 in Montrose, Arkansas to Jesse Dean Riley MD., and Claudia Grace Carpenter, Helen spent most of her youth in El Paso, Texas, and Booneville, Arkansas, later attending college at the University of Arkansas.  She met Sgt. George John Hebel of Chicago, Illinois, in Little Rock, Arkansas, where he was currently stationed in the U.S. Army during WWII.  They were married there on June 12, 1943, before he was deployed to combat duty in Europe, and they enjoyed 64 years of marriage before George passed on December 7, 2007 at age 92. They lived in Chicago until 1961 when they relocated to Sandwich, Illinois, for the next 52 years, and were members of St. Paul the Apostle Catholic Church in Sandwich.  Helen spent her last 5 years in New Port Richey, Florida.  Her employers through the years included the Army Corp. of Engineers in Jackson, Mississippi, and Teletype Corp. in Chicago. She and her husband, George, enjoyed walks at Silver Springs State Park, weather permitting, almost daily for years, playing Yahtzee and Scrabble, and especially enjoying and caring for her 4 children, 11 grandchildren, and 14 great-grandchildren.

She is loved and survived by her stepsister Rebecca, sons Robert, Richard, and James, her grandchildren, Christopher, Kyle, Keri, Nikki, Catherine, George, Devin, Derek, Stacey, Alex and Benjamin, and her great-grandchildren, Ava, Audrey, Joshua, Lena, Ginger, Josephine, Theodore, Hanna, Tori, Tanner, Brianna, Jordan, Landon, Lylah, and Lincoln. She was preceded in death by her parents, her sisters Hazel and Martha, her husband, George, and son Ronald. Helen, who always had a genuinely warm smile for anyone who spoke to her, was best defined by her unconditional love and devotion to her family, and her love and enjoyment of pets, backyard birds and squirrels, wildlife, and all things living, instilling the same virtues in her children. She will be intensely missed by everyone who knew her.

To order memorial trees or send flowers to the family in memory of Helen Riley Hebel, please visit our flower store.