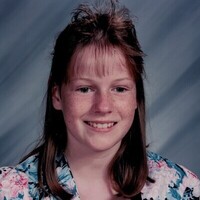 Heather L. (Sanders) Simmons, 42, of Norway, IL was reunited in heaven with her husband, Robby, and baby brother on February 20, 2022. Heather was born on March 9, 1979 in Aurora, IL. The daughter of Charles D. Sr. and June R. (Schmuhl) Sanders. She was a member of the Community Church of Christ. Heather graduated from Plano High School in the Class of 1997. She worked as a cook for Dogwood Nursing Home, Oswego Park District, Pearce’s Pub & Banquets and Norway Store. Heather was a loving daughter, mother, sister and friend to many. She enjoyed cheering for the Packers, and spending time with family and friends. SHE TOOK GREAT PRIDE IN MAKING PEOPLE FEEL BEAUTIFUL and was always there to help anyone in need.

She is preceded in death by her husband, Robert Simmons Jr.; Brother, James Grant Sanders; As well as sister-in-law, Natalie Fox.

In lieu of flowers, donations may be made to the family.

To order memorial trees or send flowers to the family in memory of Heather L. Simmons, please visit our flower store.