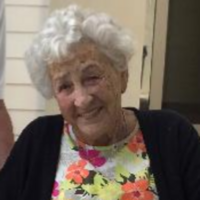 Ethel M. Fleming (Bagg) Nutini if The Villages, FL, formerly of Sandwich, IL passed away Monday, September 26, 2022, in Lady Lake, Florida at the age of 95 with her family by her side. She was born to Harry and Loretta (Gracher) Fleming in Aurora, IL on October 17, 1926.

In addition to her husbands, Ethel was predeceased by her sons Dale Edward Bagg (1994) and Allen Dean Bagg (2014); her sister, Henrietta Kathamegos and her brother, Kenneth Fleming.

Ethel was a business owner along with each of her husbands. A Standard Oil delivery truck route, Bagg’s Tastee Freez, The Hillside Drive-in and Nutini Studios were each part of her life. She retired at 70 from her lunch time position at Pizza Hut where she had much fun and taught so many. She volunteered at St. Paul’s Catholic Church as the Sandwich Fair pie lady for several years. Ethel was also involved in the very start of The Franklin Mall Project in Sandwich, IL right out of Frankie and Peg Mall’s garage.

While in Florida she was a helper at Friday night bingo and made coffee after many funeral services at St. Timothy’s Catholic Church.

Arn and Ethel loved to construct things. They built 4 houses from the ground up. Ethel much preferred volunteering or outside work. Dusting was NOT her thing! Even last year while in her assisted living home she lamented the fact that there was no way to reach out and help folks like she once had. Except one day when the kitchen staff was short of clean-up help. She pushed her walker around and proceeded to bus the tables.

And did she love to play cards! Peg and Midge were her pinocle pals right up until the end.

That was ethel in a nutshell. She was loved and will be missed.

A celebration of Ethel Nutini’s life will be held at a later date.

To order memorial trees or send flowers to the family in memory of Ethel M. Fleming (Bagg) Nutini, please visit our flower store.