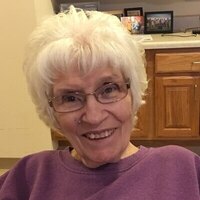 Elizabeth was born on June 7, 1937 to John and Eva Janco in Granite City, IL as one of eleven siblings. During high school, she made Jesus Christ her personal Savior and Lord, an important decision that forever changed the direction of her life. She became an active part of the Granite City Church of the Nazarene.

After graduating with honors from high school, Elizabeth attended Olivet Nazarene University in Bourbonnais, IL where she majored in math and met Martin C. Arni, who was studying for the pastoral ministry. The two were married on June 20, 1959.

After the wedding, Marty and Liz (as they were known then by family and close friends) moved to Kansas City, MO where they lived until early 1963 while Martin attended Nazarene Theological Seminary and earned the Master of Divinity degree. While in Kansas City, the couple were very active in the St. Paul Church of the Nazarene. Elizabeth taught math in the public school system to support Martin through seminary.

After graduating from NTS in 1963, the couple lived in Lubbock, TX, to start their first pastorate. In 1967, the Arnis moved to Hobbs, New Mexico to pastor their second church. In 1970 the family moved to Waco, TX where Martin became the pastor of the First Church of the Nazarene. Under their mother’s watchful care, the children enjoyed a very happy childhood. Elizabeth was known far and wide for her crescent rolls which she made each week for the Sunday noon meal. She taught an exciting Junior Sunday School class, complete with motivational prizes and a secret chair! Elizabeth also poured lots of time into helping her children develop a lifelong love for the Bible through Junior Bible Quizzing.

It was in Waco that Elizabeth began babysitting children in her home, a practice that she continued for most of the remainder of her life. In April of 1975, the family moved again to take another pastorate in Chrisman, IL, where they stayed for 2 ½ years. During this time period, Elizabeth’s passion for pursuing health through nutrition and vitamins began. Another move came in November of 1977 when the family moved to Havana, IL, where the family enjoyed an effective ministry for nine years.

Elizabeth’s legend as an amazing cook continued with homemade bread, homemade cinnamon rolls, and her layered jello salad for the holidays. She made home an inviting and peaceful refuge with music playing on the record player, fresh aromas from the kitchen, and a crackling fire in the fireplace. She annually canned lots of produce from Martin’s gardens. Being born during the depression, she rarely threw anything away and often took pride in the amount of money saved by her home cooking rather than eating out at a restaurant.

In 1986, the family moved to Sandwich, IL. In 1991 they became a much beloved pastor and wife of the Church of the Nazarene in Cleveland, MS. After Martin’s stroke in November of 1995, he and Elizabeth eventually settled down for their retirement years in a trailer out in the country in Leland, IL (near Sandwich, IL).

She was grief-stricken with Martin’s death on March 10, 2016 and longed for the day when they could be reunited. In 2017 with dementia having set in, Elizabeth became a resident at Tabor Hills Assisted Living and then Tabor Hills Healthcare Facility. She enjoyed the good meals and spent most of her time reading her Bible in her apartment or room.

Elizabeth was a Proverbs 31 woman who invested her life in God’s Word and her family and would talk to anyone who would listen about the importance of vitamins and good nutrition. She was rarely sick throughout her life and prided herself to the very end in not taking any medicine. Until bereaved by Martin’s death, she had always said she wanted to live until about 114! For sure, she will live on for eternity in heaven and she lives on in the lives of her children and grandchildren!

To order memorial trees or send flowers to the family in memory of Elizabeth Eleanor Janco-Arni, please visit our flower store.