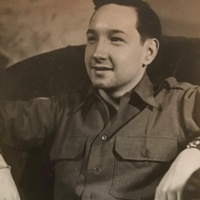 Edwin Thomas Kennedy born April 29th, 1927 in Aurora IL, passed away April 22nd, 2018. He served in the Military during World War II, after coming home he met and married Kathleen Carolyn Pitzer, they had three children, He worked and retired from Western Electric in Montgomery Illinois. He was an avid model airplane builder, bowhunter, fisherman, ice skater, skier, he loved traveling and camping with his family. Everywhere he lived his neighbors knew him and loved him, he was always there to help everyone. Though his physical stature was not tall, his personality was larger than life. Above all, no matter how hard life was on him in the early years he always knew that the love he had to give to the family he would someday have showed through for generations. He enjoyed every minute being a Husband, Father, Grandfather and Great Grandfather. He is survived by, Children: Tim (Char) Kennedy of Wisconsin, Tamara Kennedy-Morris (Mike) of Sandwich, and Tina Kennedy of California. Grandchildren: April Morris (Ethan), Tyler Kennedy, Saede Lussier (Shawn), Serenity Bianco (Richard), Tegan Kennedy, Edwin Morris (Corey), Clancy Jones (Max). Great Grandchildren: Jackson & Ryker Lussier, Emma Bianco. Extended family: Barb Reeves, Pat Sweeney, Jennifer Harris. Many friends and neighbors will remember him and his contagious smile and laughter fondly. Memorial service will be held Saturday April 28th 2018 at 10:00 a.m. at the Beverage Family Funeral Home Sandwich, IL. www.beveragefamilyfh.com
To order memorial trees or send flowers to the family in memory of Edwin Thomas Kennedy, please visit our flower store.