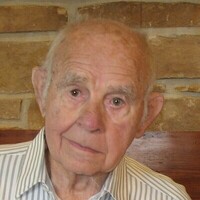 He was born in rural Somonauk, IL, on September 30, 1929, the second of seven children of Raymond and Irene Fox.

Ed grew up on the family farm north of Somonauk. He enlisted in the Illinois Army National Guard in 1948. He was called up to the Army 129th Infantry during the Korean War and served as sergeant in the Service Company stationed in Japan. He drove trucks for George Shaw, and worked as a farm hand for Ralph Dolder in rural Waterman. He married Myrna Raney on November 12, 1955, in Plano, IL. They lived in rural Hinckley, IL, where he farmed for 33 years. He worked for the Sandwich Fair Association Ground and Maintenance crew for several decades, and for Squaw Grove Township. He was a member of the Waterman American Legion Post 654, and a member of the Hinckley Lions Club where served as President.

He is predeceased by his wife, Myrna, of 65 years, his parents Raymond and Irene, brothers Bernard and John, sisters, Mary Meyer and Dorothy Schule. Brothers-in law Arthur Schule, Robert Meyer and Victor Meyer, and his son-in-law Michael Heaton.

In lieu of flowers, donations may be made to Open Door.

Visitation will be held on Monday, April 11, 2022 from 5:00 – 7:30 P.M. with a Rosary at 7:30. A private committal service for the family will be held the next day, April 12, 2022 at St. John Catholic Cemetery in Somonauk, IL. Funeral arrangements were entrusted to Beverage Family Funeral Home. Online condolences may be made at www.beveragefamilyfh.com

To order memorial trees or send flowers to the family in memory of Edward R. Fox, please visit our flower store.