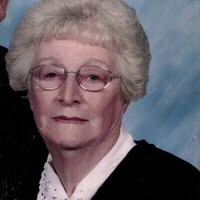 Doris passed away peacefully on July 11, 2021, at the Franklin Grove Nursing Home after a short illness.

Doris was born in Thanet, Kent, England to William and Ellen (Euden) Belsey on June 11, 1932. She had a brother William and half siblings Reginald, Charles and George Grainger.

When the war broke out and England was being bombed Doris and her brother, William, were sent to the county to the Rutledge Family Farm to keep them safe. When the war was over Doris and her brother returned to Ramsgate, England where she took care of her ailing mother. In March 1953 she married Dean Heckman, an Air Force soldier stationed in Ramsgate. When Dean's tour was over, they came to Illinois. They settled in Ashton where Dean started his Plumbing and Electrical Business.

Doris was the typical housewife but was also by her husband's side helping with his business whenever she could. It was her love of children that prompted her to become a Day Care Provider for many years. She cared for grandkids, great grandkids and many others. She became known as Grandma Doe to many. Together Dean and Doris loved watching them in all their sporting, school and church activities. Later Doris was the custodian of the Ashton United Methodist Church for 25 years.

Doris was a kind and loving person who was always willing to help out wherever she was needed. She was famous at the Church's dinners for her spaghetti casserole which disappeared quickly.

Dean and Doris shared 61 years of marriage before his death in 2014. They returned to England four times and loved travelling. They visited family and friends in Arizona, Virginia and Texas. Doris also loved camping and gardening, but most of all she loved her family which included many pet dogs through the years.

She is preceded in death by her husband, Dean; her parents; her siblings William, Reginald, Charles, George; Son-in-law, Larry Fisher; and Brother-in-law, Ronald Heckman.

Doris is survived by her children: Sandra (Donald) Stover, of Ashton, Edward (Penny) Heckman of Peoria, Arizona, and Diane (Bryan) Mammen of Ashton; 10 grandchildren and 23 great grandchildren; Brother-in-Law, Melvin (Phyllis) Heckman of Florida; Sister-in-laws, Donna (Dick) Stahler of Virginia and Melba (Ronald) Heckman of St. Louis, Mo; And many nieces and nephews in England and the United States.

Funeral Services will be on Saturday, July 17, 2021 at the Ashton United Methodist Church with Pastor Jan Shaulis presiding. Visitation will be at 10 AM. A celebration of Doris's life will be at 11 AM with a luncheon to follow. Cremation has been provided by Beverage-Lyons Family Funeral Home. Burial will be at the Ashton Cemetery. Online condolences may be made at www.beveragelyonsfamilyfh.com.

Memorials have been established to: Honor Flight and Ashton United Methodist Church

To order memorial trees or send flowers to the family in memory of Doris Emily (Belsey) Heckman, please visit our flower store.