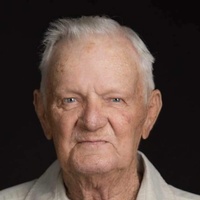 Wade, Donald Eugene “Sam” age 88 of Sandwich IL passed away at home on April 3, 2018.  He was born on October 27, 1929 in Montgomery, IL. Sam along with his 11 siblings were raised in Plano IL on the Tribune Farm (currently Silver Springs State Park).  They were born and raised during the depression. Often the boys would find themselves hunting on the farm for food. On one squirrel hunting expedition, Sam, rested the shotgun on his toe when it accidentally discharged.  Many years later, that crazy crooked toe was always good for an adventurous story that Sam loved to tell. When Sam was 12 years old, him and his brothers spent several months taking turns driving “Scotty Wheeler”. Scotty was a reputable pipe organist who performed in cathedral churches across the country.  There were no drivers licenses required at that time.   They had to put wooden blocks on the gas and brake pedals in order for Sam to drive. This trip allowed Sam and his brothers many adventures to include attending school in Burbank and seeing the Rose Bowl parade in Pasadena. For odd jobs they would garden and he often spoke fondly of the flowered hedges.    Never a rule follower, Sam liked to brag that the Wade Brothers proudly held the title of “Hell Raisers” in Plano, IL. Sam would gladly tell the stories, like sneaking up to the police station and putting the police car up on blocks just barely off the ground. Someone in the group would go racing passed the parked police car and would throw fireworks out the window causing the police officer to run out of the station to chase them.  The officer would start the squad, throw it in gear and his tires would simply spin in place. The group would get away laughing to cause trouble the next day. Sam met his wife Betty at local diner in Sandwich. As the story goes, Betty was 15 sitting at the table when Sam, who was all of 17, introduced himself to her. With a single finger Sam drew his name on Betty’s back and told her he’d marry her some day. Their love story spans over many years.  They loved each other so much, they were married twice. They were married a total of 55 years and have spent their entire married life in Sandwich. Sam was in the Army from 1951-1953 during the Korean War. Corporal Wade spent his service time in Kentucky and later in Germany. Sam was a member of the Carpenters Union Local 1889. He retired from his construction career from Wil-Freds. As superintendent, he proudly built many well known buildings in the area.  They included the Aurora Fire Department (now museum), old Kane County Sheriff’s Department (on Fabyan), Illinois Math and Science Academy, Waubonsee Valley High School and the Mendota Hospital. Sam most recently worked for his nephew and brother in law at LDL Transfer in Sandwich, IL as a handyman. During his life, Sam had many interests. They included being a “pool shark” with a poker face, never challenge him to a pool game, as you’d probably lose. He loved trap/skeet shooting at Sportsmans Club many years ago.  He liked to tell you then when he showed up to shoot, the others would pack up and leave. There are many trophies in the garage to this day that validate his success stories. Once he’d mastered trap shooting, he went on to challenge himself with the game of golf. The one game he could never conquer. The game challenged him to the very end. It wasn’t a golf game unless he could put a couple of dollars on the round. Betty says he loved the game of golf so much, that in order to see him, she had to learn to play golf so she could spend some time with him.   Ironically, she holds the “hole-in-one” title that he always coveted. His last round consisted of six holes when he tired and came home just two seasons ago. Sam is survived by his loving wife Betty. They raised three children together; Charlotte Wade of Aurora, IL, Barbara (Mike) Klobertanz of Sheffield, IL., Tina (Daniel) Kott of Sandwich, IL. He has two grandsons, James (Meghan) Wade of Sandwich IL and Trenton Webber, of Sandwich, IL and three step granddaughters, Kately Kott of Lombard IL, Kelsey Kott of Rock Hill, South Carolina and Kendall Kott of Lombard, IL.  Sam would proudly tell you how his great grandson, Anthony Wade, made him great and that there is another great on the way! Sam is preceded in death by his parents Arthur and Fern (VanKirk) Wade, his sisters Luella, Ila and Pat, his brothers Howard, Robert, John, Gerald, Richard, William, and Chuck. He is survived by his brother Arthur (Bud) Wade who turned 100 years old on the day that Sam passed. A visitation will be held Friday, April 6th from 4-7pm at Beverage Family Funeral home, located at 104 Terry Street in Sandwich with his funeral at the same location on Saturday, April 7th at 10:30am
To order memorial trees or send flowers to the family in memory of Donald ( Sam ) Eugene Wade, please visit our flower store.