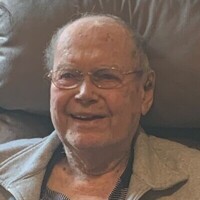 Donald C. Ross Sr. passed into eternity on February 8, 2022 at the age of 90. He lived in Decatur, GA. Donald was born on September 14, 1931 in Franklin Grove, IL to Frank and Mabel (Thomas) Ross. He graduated from Franklin Grove High School in 1949.

He joined the US Army in 1950 during the Korean War and earned the Sharp Shooter badge and was a court reporter. He received an honorable discharge in 1952 at the rank of Staff Sergeant.

After returning from the military, Donald married Mary Leonard in 1951. They lived in Ashton, IL and he went to work for ComEd as a Lineman. He worked at ComEd for 40 years and retired as a Line Dispatcher in Rockford, IL.

After retiring, they moved to Phoenix, AZ where they enjoyed many years away from the Illinois winters. After some health issues, both Donald and Mary decided to move to Atlanta, GA into an assisted living facility near their son Tom Ross, where he and his family took great care of them the last few years.

Donald loved auto racing, golf, animals and spending time with family and friends. He will be deeply missed by all. He was a member of St. John Lutheran Church of Ashton. He volunteered for many years on the Ashton Fire Department. He also was a 32nd Degree Mason and a Shriner.

Donald was preceded in death by his parents, Frank and Mabel Ross.

Memorials may be directed to the Ashton Fire Department.

A private graveside service will be held at a later date. Funeral arrangements were entrusted to Beverage-Lyons Family Funeral Homes. Online condolences may be made at www.beveragelyonsfamilyfh.com

To order memorial trees or send flowers to the family in memory of Donald C. Ross, Sr., please visit our flower store.