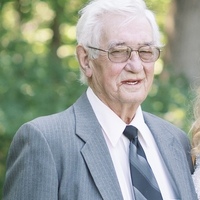 Chauncey Alan Baker, 84, of Leland, IL passed away peacefully surrounded by his family on September 23, 2022. He was born on November 4, 1937 to Hazel (Tellefson) and Chauncey Baker.

He grew up on the family farm in Leland, along with his younger sister, Sara.

His childhood education included time at the school in Rollo, IL and at a small country school near the family farm. He then attended Leland High School to finish off his education and graduated in 1955.  He attended the graduation ceremony just long enough to grab his diploma then climb in his semi and haul a load of livestock to Chicago Stockyard.

He took a break from his trucking career to enlist in the U.S. Army and serve the country he loved. He did his basic training at Fort Leonard in Missouri and then completed his Signal Corps training at Fort Gordon in Georgia. He then went on to complete his enlistment in Germany as an E4 before coming home to the family farm.

Then he met the love of his life, Bonnie Jacobson. They were married in Hinckley, IL on October 23, 1965. They spent 48 years together loving and raising their family.

Chauncey briefly left trucking to work the family farm and Northern Pipeline and to be home for his family. When the children were older, he returned to his trucking career until he retired to be home to care for Bonnie.

He was extremely proud of his children, but nothing brought a smile to his face like his grandchildren and great grandchildren.  They brought him tremendous joy in the difficult years since Bonnie’s passing.

He is preceded in death by his wife, Bonnie; his parents; and an older brother Charles who died as a child.

In lieu of flowers, please direct memorials to the family to disburse to charities of their choosing.

Chauncey was rarely seen without a western style shirt and boots.  We encourage you to wear your western shirts & boots to the visitation in his memory.

To order memorial trees or send flowers to the family in memory of Chauncey Alan Baker, please visit our flower store.