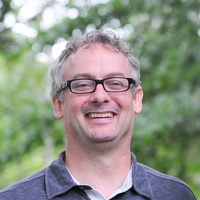 Carl A. Parchert II, age 48, passed away peacefully late at night on April 19, 2018, surrounded by his family in New Richmond, Wisconsin after a nearly two year long battle with cancer.  He was born August 20, 1969, in Sandwich, IL, to Arnold and Janet (Rompf) Parchert. He was a 1987 graduate of Somonauk High School and graduated with a Bachelor’s Degree from Northwestern University.  He worked in IT Support at Madden Communications in Chicago, IL.  Carl loved music and could often be found listening to Elton John, Ray Charles or Frank Sinatra on his record player.  Carl lived most of his recent years in Portland Oregon, where he enjoyed spending quality time with his beloved daughters.  Carl was a cherished friend to many, a great older brother and a beloved son.  He is survived by his daughters, Portia and Ada; his parents, Arnold and Janet (Rompf) Parchert; brother, Adam Parchert (Lisa); sister, Rachel Hyman (Aaron); a niece, nephews, and cousins.  Family, friends, and others whose lives Carl touched are invited to a ‘Celebration Of Life' at SOMONAUK HIGH SCHOOL, 501 W Market St, Somonauk, IL 60552.  The ‘Celebration Of Life’ will be held on Saturday, May 5th featuring live New Orleans Jazz starting at 10:30am with a memorial and luncheon to follow.  Everyone is welcome to come reminisce, grieve, support each other and celebrate Carl’s life. On line condolences may be made at www.beveragefamilyfh.com
To order memorial trees or send flowers to the family in memory of Carl Andrew Parchert II, please visit our flower store.