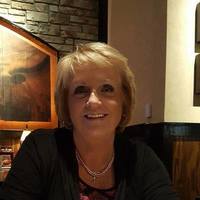 Brigitte H. “Momo” Hoffman, 73, of Oswego, IL passed away peacefully on Monday, February 3, 2020, at 1:22pm at Advocate Christ Medical Center in Oak Lawn, IL after a battle with advanced heart failure, with her daughter by her side.  Brigitte was born on October 16, 1946 in Germany, to Margarete (Kalkbrenner) and Bruno Jaron .  She met Daniel M. Hoffman while he was stationed in Bad Kreuztnach, Germany and they were married on November 5, 1968.  They had one daughter, Tamatha on September 6, 1969, and they moved back to the United States in March of 1970. They later divorced in 1986.  Brigitte made the United States her home until her death.

Brigitte spent her life in retail sales after being a stay at home mom until her daughter started school. She worked for Yonkers Department Store and First National Bank in Burlington, Iowa, as well as Iowa City, Iowa.  Her career took her to Fort Collins, CO, from there she moved to Aurora, IL to be close to her daughter. She worked for Wicks Furniture, Laz-y-boy Furniture, Ashley Furniture, Cribs to College and rooms4kids in Naperville, IL.  She loved HGTV, crotchet, travel, and spending time with her grandson, Jaron, playing ball, going to trampoline parks, downtown Chicago, and watching him play basketball, rarely missing a game.

She was proceeded in death by her ex-husband Daniel Hoffman, her mother and father, her brother and sister in law, her father in law, and her great nephew Carter.

Cremation was provided by Beverage Family Funeral Home in Sandwich, IL on February 5, 2020. Services will be held in April in Burlington, Iowa at a time and place to be decided at a later date. In leu of flowers, please consider donating to the GoFundMe.com account under Tami Hoffman, that was set up by a family friend to help with service expenses and educational expenses for her grandson.

To order memorial trees or send flowers to the family in memory of Brigitte H. Hoffman, please visit our flower store.