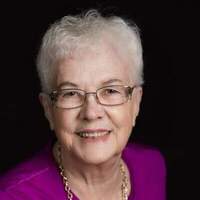 Betty Joyce (Luttrell) Wade, age 88 of Sandwich, IL, passed away at Cedarhurst of Yorkville on January 9, 2021.   She was born April 3, 1932, in Sandwich at 3 rd and Green Street.   Betty, along with her parents and siblings, lived in Somonauk until a house fire took their home.  When Betty told the story, she would tell you that she watched their house burn from across the street.  She would also fondly tell you about swimming in the horse trough, dandelion soup for dinner, and the occasional duck her mother, Thelma, would hunt and serve for dinner.   Eventually, their family moved to the west end of Sandwich to a home her father, Bart, built, which is now known as LDL Transfer.

Betty graduated from Sandwich High School in 1950.  She worked at the truck stop located next to their home, where she met her husband, Sam.  In their teens, Sam told her he would marry her while drawing his name on her back with a single finger.  Betty also worked as a telephone operator as a teenager at the telephone office in Sandwich.  She and her sister, Rosie, also loved skating at the roller rink.  Many fond stories were often told about their teenage years.

Betty was a trained professional Arthur Murray dance instructor.  She and her dance partners were often hired to do exhibition dances at different theaters and dance halls in the area, including the Sky Club in Aurora.  During her dance career, Betty had a stage name of Betty Prescott.  In her later years, she had arthritis in her knee and attributed it to her dancing.
Betty proudly spent numerous years as a bookkeeper at Lincoln Land Collection Agency and Fanning Chevrolet in Aurora.

Betty and Sam were married twice.  Their first marriage was in 1950 in Arkansas.   They went their separate ways and then remarried again in December of 1964.    They then purchased their first home in Sandwich, and it was their home for 55 years.

In her spare time, Betty was an avid crafter.  She taught herself to knit and crochet.  In her later years, she picked up counted cross stitch and seldom put her stitching work down.  Betty regularly entered her projects in the Sandwich Fair.  She always brought home best in show purple ribbons as well as many blue ribbons.

Betty had some extra time in her retirement and wanted something to do.  She took a part time job at the Sears Appliance store on Route 34 in Sandwich during the late 1980s and early 1990s.  She proudly learned the computer system in the store, and that piqued her interest to get her own computer and learn to use it at home.

Betty was a bowler as well as a golfer.  On June 14, 1992, she had her famed hole-in-one at Edgebrook Golf Course.  She proudly reminded all of us of this accomplishment regularly.

Betty and Sam spent winter months vacationing in Florida, as well as time spent at their property “up north” in Wisconsin with all of their family.
Family members recall her “Happy Birthday” opera songs and her love of garage sales.  She was affectionately known as Grandma Fuzzy to her grandchildren.
Betty is survived by her children Charlotte Wade of Aurora, IL; Barbara Klobertanz (Mike) of Sheffield, IL; and Tina Kott (Daniel) of Plano, IL.    Betty has two grandsons, James (Meghan) Wade of Sandwich, IL, and Trenton Webber of Sandwich, IL, and three step granddaughters: Katelyn Kott of Elk Grove Village, IL; Kelsey Kott of Rock Hill, SC; and Kendall Kott of Lakemoor, IL.  Her great grandchildren include Anthony Wade and Jadyn Wade of Sandwich, and her brother, Leon Luttrell, of Sandwich, IL.    Betty was preceded in death by her husband Donald (Sam) Wade;  parents, Bart and Thelma Luttrell; her brother, Obie Luttrell, and her sister, Rose Whitlatch.

A visitation will be Wednesday, January 13 from 10 am to 12 pm.  Masks will be required with limited capacity in the funeral home at any one time due to COVID.   The funeral will follow for family only at noon at Beverage Funeral Home located at 104 Terry Street in Sandwich, IL, with a burial following at Oak Ridge Cemetery.
To order memorial trees or send flowers to the family in memory of Betty Joyce Wade, please visit our flower store.