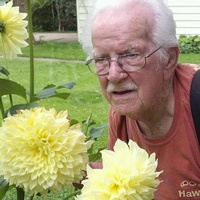 He was a machinist by trade retiring from Impact Die, He served his country during WW II with the Army Air Corp. He was at one time a board member with the Somonauk United Presbyterian Church, where he is a life member, he enjoyed gardening, woodworking. He enjoyed traveling to all 50 states , spending time with the love of his life Lu and his kids with family. He enjoyed telling stories to anyone who would listen He more recently during his 90’s he enjoyed flying in Jay Rud”s Stearman Bi Plane, he was honored on the ice at the Blackhawks game on veterans weekend  his WW II Honor Flight to Washington DC. and at his 100th birthday which the City of Sandwich honored him with Art Wade Day.

He is survived by his children Linda Trostle, Michele Wade, Mark (Ginger Lang) Wade and Wendy Wade Hilliard. He is also survived by his 2 grandchildren Mathew (Kristin Michel) Trostle and Erin Trostle. He is preceded in death by his parents, his wife Lucille, his son A. Edward, 3 Sisters : Ila , Luella and Patricia. Brothers; Howard, Robert, John, Gerald, Richard, William, Chuck and Don “Sam “. He is also preceded in death his mother and father in-laws Clyde and Ruth park, Sister in-laws Helen and Margaret, sons in-law Michael Mowery and David Trostle and daughter in-law Birgit Wade. He will be greatly miss by all who knew him.

Funeral service will be held Saturday September 1st 2018 at The Somonauk United Presbyterian Church Governor Beveridge Rd. Somonauk at 1 :00 p.m. with visitation beginning at 11:00 a.m. Interment will follow at Oak Mound Cemetery Somonauk, IL . Service were entrusted to the Beverage Family Funeral Home Sandwich IL Memorials may be directed to Somonauk UP Church and Abilities Plus. .www.beveragefamilyfh.com

To order memorial trees or send flowers to the family in memory of Arthur Edward Wade, please visit our flower store.