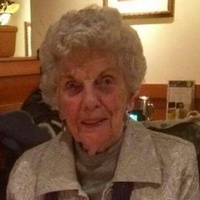 Marjorie Ann Jones 90, of Somonauk, IL. Passed away January 20, 2018 at Valley West Hospital Sandwich, IL. She was born on January 20, 1928 in Aurora, IL. To the late Arthur and Mabel (Baker) Behrens. She was a member of the 1st Baptist Church of Plano. She enjoyed watching deer and cardinals that she called “red birds“, she was an avid Chicago White Sox fan, she also enjoyed Puzzles and word search books. But what she enjoyed the most was her family and her grandchildren and great grandchildren. She is survived by her Loving daughter Karen (Dale) Torkelson of Sandwich, her grandsons; Randy (Mary) Torkelson of Leland, Greg (Cyndi) Torkelson of Bolingbrook, Tim (Carrie) Torkelson of Bolingbrook and Brian (Kristen) Torkelson of Northbrook. 3 sisters; Kay, Jean and JoAnn (Jim) 5 brothers; Al (Goldie) John, Art (Charlene), Dick (Marie) and Bill (Caroline). 9 great grandchildren; Nicole, Rachel, Noelle, Hallie, Kiley, Keara, Jordan, Brooklyn and Owen. She is preceded in death by her parents, her husband Oscar 2001,son Gary 2005, sister Marion and brothers Bob, and Melvin. Funeral services will be held Tuesday January 23, 2018 at 6:00 p.m. at the Beverage Family Funeral Home 104 Terry St. Sandwich, IL. Visitation will be held same day from 3:00 p.m. till the time of service. www.beveragefamilyfh.com
To order memorial trees or send flowers to the family in memory of Marjorie Ann Jones, please visit our flower store.