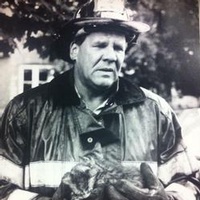 Donald S. Rimgale, Sr., 77, originally of Chicago, IL, died Monday, November 13, 2017 peacefully at home in Elmhurst, IL. He was born August 3, 1940, the son of Adam Donald and Stella Pearl (Lis) Rimgale. Don retired from the Chicago Fire Department after 31 years in November 1996. As an active member of CFD Union Local 2 he served as Business Agent and various other union positions throughout his career. Companies that he served on were Snorkel Squad 2, Flying Squad 3, Squad 4, Squad 5, Engine 88 and the Office of Fire Investigation (OFI). He received numerous commendations throughout his years of service. Don proudly became Chief of the Sandwich Fire Department contributing to the community in which he and his family resided for many years. He retired from the Sandwich Fire service in July 2016 following aggressive cancer treatment. It was during his years of service as an Arson Investigator, with the OFI, that his movie career launched. Don was the inspiration behind Robert DeNiro’s character, Inspector Don Rimgale, in the blockbuster film, “Backdraft” (1991). Don made his debut in the film having other small speaking parts, and is credited in the movie’s closing credits. During this time, he became a member of the Screen Actors Guild, obtained an agent and then continued to audition for movie and television parts. He had roles in “Baby’s Day Out”, “Gladiator”, “Chain Reaction”, “The Fugitive”, “Henry: Portrait of a Serial Killer, Part Two Mask of Sanity”, and “Under the Bus”. Television appearances were made in the “Untouchables”, “Missing Persons”, “Angel Street”, “Early Edition”, “Legacy of Lies” and “Polish Hill”. Don was a featured guest on The Oprah Winfrey Show, Good Morning America and Entertainment Tonight. Survivors include his wife Sharon (nee Klug) Rimgale of 30 years, sister Barbara of Orlando, FL, brothers Ron (Bernie) of Nashville, TN, Adam, Jr. of Tucson, AZ; his children Becky Mannarelli, Donald “Donn” Rimgale, Jr., Roxanne (Tim) Gardner, Rachel Rimgale, Staff Sergeant Robert Rimgale (retired), Staff Sergeant Timothy (Brittany) Rimgale currently serving in the U.S. military; grandsons Mike Mannarelli, Ryan Rotter, Griffin and Simon Gardner and granddaughter Abigale Rimgale; along with many nieces and nephews. He was preceded in death by his beloved son, Daniel (6), grandson Jonathan (6), and his parents. A memorial service celebrating his life will be held at the Sandwich Fire Department, 310 E. Railroad St., Sandwich, IL at 4:00 p.m. on Saturday, November 25. Visitation will begin at 1:00 p.m. Cards of condolences may be sent to his family in care of Beverage Family Funeral Home, 104 Terry Street, Sandwich, IL. www.beveragefamilyfh.com
To order memorial trees or send flowers to the family in memory of Donald Stanley Rimgale, please visit our flower store.