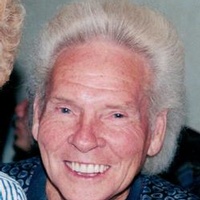 Today in Heaven, Reverend Gerald Eugene Becker, a minister and soldier of the cross is having his coronation day. Gerald made his entry into the world on June 18, 1928. His exiting was on October 28, 2017. Gerald was born in Bassett, Arkansas . He was the third oldest of nine children. Life began for Gerald when he met Joanna Buri, and they married in 1949. They enjoyed 68 wonderful years together. They were blessed with two sons, Jerry Eugene Jr. ( Vicky ) and Jeffrey Lynn ( Barbara ) . He was blessed with eight grandchildren and eleven great grandchildren. In 1950, life really began again for Gerald when he accepted Jesus as Lord and Savior and answered the call to ministry. He served as pastor for two churches. The first, Joliet Revival Center in Joliet, IL from the late 1950s through the early 1960s. And where he was best known, as senior pastor of Faith Tabernacle Church in Aurora, IL from 1965 to his retirement in 1985. He also had the privilege of being the longest-running board member of Anchor Bay Evangelical Association where he served faithfully for many years. He was delighted to spend his last years as a member of his grandson, reverend Jamin Becker’s ministry, Impact Church. Reverend Gerald E. Becker’s passing will be celebrated with coronation service, to be held at Resurrection Church, 4054 Fox Valley Center Drive, Aurora, IL on November 1, 2017. Viewing will be from 9:00 a.m. to 11:00 a.m. time of service with interment to follow to Lincoln Memorial Park Cemetery, Aurora, IL. For service question please contact Impact Church at 630-999-5181 Family was assisted by Beverage Family Funeral Home, on line condolences maybe made at www.beveragefamilyfh.com
To order memorial trees or send flowers to the family in memory of Reverend Gerald Eugene Becker, please visit our flower store.