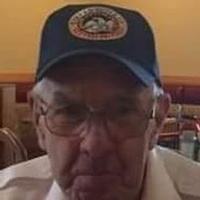 Charles Ruben Ramsden “Chic”, 84 of Plano, IL. passed away at his home on Monday, October 16, 2017 with his family by his side. He was born on March 11, 1933 to Josiah and Rena (Passini) Ramsden in Plano, IL. He married Betty Zvanut in Aurora, IL. He was a Pilot and enjoyed flying, owning his own planes. He was a carpenter and a member of the Carpenters Union. He served his country with the Illinois National Guard. He was a member of the American Legion Post 395 in Plano, IL. and sold Ramsden Wood products. He passed way 3 blocks from where he was born and died in the house he helped build. He is survived by his wife Betty, his children: David (Robin) Ramsden of Cleveland, MN., Patricia (David) Hensley of Springfield, IL., Tony (Betsy) of Rochester, IL., Dr. Timothy Ramsden of Panama City FL., and Jeanette (Juan) Hernandez of Sandwich, IL., 13 grandchildren: Paul and Celia Ramsden, Jacqueline (Matt) Magis, Michelle Hensley, Nic (Paige), Jim and Dan Ramsden, Tiffany, Ryan and Emily Ramsden and Benjamin( Christina) and Hanna Hernandez, and great grandchildren Gracie and Tyler Magis, and Rebecca Ramsden. He was preceded in death by his parents, his granddaughter Danielle Hensley, his sisters: Laurette, Kathryn, Donna and Marguerite and one brother James. Visitation for Chick will be held on October 23, 2017 at St. Mary’s Catholic Church Plano, IL. from 9:00- 10:00 a.m. Mass to follow at 10:00 a.m. at the Church. Interment to follow at St Patrick’s Cemetery in Bristol with Military honors.
To order memorial trees or send flowers to the family in memory of Charles ( Chic ) Ruben Ramsden, please visit our flower store.