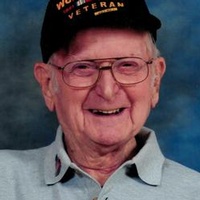 Jean Quentin Bearrows 98, of Lindenwood, IL. went to be with his Lord and Savior on September 15th 2017 at Serenity House, Oregon, IL. He was born on May 20th 1919 in Flagg Twp., IL to the late Bert and Maude (Furman ) Bearrows. Jean proudly served his country with the U.S. Navy as Aviation Machinist’s Mate 2nd Class. He married the love of his life Myrtle Jaeger on September 20th 1941. They will be celebrating their 76th anniversary in heaven. He owned and operated the John Deere dealership at Creston, IL. The two of them proudly served their community of Lindenwood. Jean was Postmaster and helped organized the Fire Department. They both owned and operated the grocery store, and farmed in the area. He was a life-long member of Immanuel Lutheran Church of Lindenwood serving as a Sunday school teacher and various board positions. He was a 54 year member of the Stillman Valley American Legion Post 1072. He enjoyed fishing and vacationing at the cabin that he built and enjoyed with his family in Chetek, WI. His passion was reading, woodworking and antique John Deere tractors. He is survived by his son; Dennis (Lorraine) Bearrows of Chana, two daughters; Lynn (Richard ) Olson of Sandwich and Beth (Joe) Rangel of Stillman Valley, a daughter-in-law Doris Bearrows of Chetek, WI. He was blessed with fourteen grandchildren; Paul Bearrows, Todd (Katya) Bearrows, Cheryl (Dale) Dixon, Christina (Josh) Swartz, Stacey Lawson, Coralee (Michael) McGee, Regina (Ron) Nicholls, Elizabeth Miller, Amanda (Dave) Anderson, Emily (Jeremiah) Wiencek, Michael (Lisa) Olson, Irma (Oscar) Castillo, Anthony (Carmen) Rangel and Alicia (Ryan) Brown. Also, 30 great grandchildren and two on the way. He is preceded in death by his parents, his loving wife Myrtle 12/12/12, son; Bertran, sister; Hazel, brothers; Jay, Kenneth and Carson. Funeral services for Jean will be held Wednesday September 20th 2017 at 11 a.m. at the Immanuel Lutheran Church, Lindenwood, IL. with Rev. Timothy Frick officiating. Visitation will be held 2 hours prior to the service from 9:00 a.m. till the time of the service. Interment to follow to Lindenwood Cemetery. In lieu of flowers, memorials may be directed to the Immanuel Lutheran Church, or Serenity Hospice and Home, Oregon, IL. Obituary and condolences at www.beveragelyonsfamilyfh.com.
To order memorial trees or send flowers to the family in memory of Jean Quentin Bearrows, please visit our flower store.