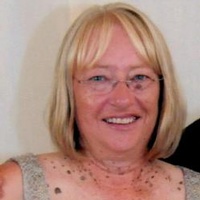 Kathy Adella Hornick, 64 of Newark, IL. passed away at Kishwaukee Hospital on August 9, 2017. She was born on January 1, 1953 to Leopold Volk and Dorothea (Kowski) Ellis in Chicago IL. She married John Hornick on May 8, 1976 in Burbank, IL. and spent the next 41 year’s happily married. She worked at Wal-Mart as a Photo Tech and retired after 20 years of service. She loved watching the Cubs, camping, reading, and drag strip racing, going to different states to watch drag racing. Her biggest joy was her 4 grandchildren. She is survived by her husband John; her children, John (Melissa) Hornick of Hinckley, IL. Kristy (Zachary) Seyller of Newark, IL., and Tim (Patricia) Hornick of Sandwich, her sisters; Lynn Demke of Sandwich, IL., Kimberly (Lori) Ellis - Bakhaus of Plainfield, IL. and one brother Paul (Cheryl) of Bedford Park, IL., her grandchildren; Jacob, Shawn, Elena, and Riley, and several nieces. She was preceded in death by her parents. Memorial service will be at the Beverage Family Funeral Home 104 Terry St. Sandwich, IL. August 13, 2017 at 6:00 p.m. Visitation will be from 12:00 -6:00 p.m. at the Funeral Home. On line condolences may be made at www.beveragefamilyfh.com
To order memorial trees or send flowers to the family in memory of Kathy Adella Hornick, please visit our flower store.