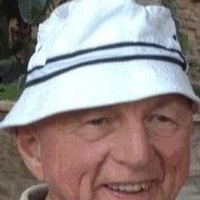 Robert Parr Yuill 86, passed away on June 20, 2017 with his family by his side. He was born on March 6, 1931 to the late Robert and Lucile (Parr) Yuill in Ottawa, IL. He spent his working career as a Civil Engineering Technician. He served his country with the US Navy. He was married to Shirley (Ziel) for 45 years, she passed away in 2002. He married Linda Keutzer on August 5, 2009, she survives him. He was a member of the Trinity Church United Methodist in Yorkville. He was a member of the Northern Illinois Unit of the W.B.C.C.I. Airstream Club. In the summer months he enjoyed the company of his friends in the Platter Club in Peru, IL. For the last 12 years, he spent winters at Rancho Casa Blanca in Indio, CA, where he was known as “the popcorn man” making popcorn every day for everyone. He also enjoyed reading, gardening and cooking for his family and friends. He loved to travel the country in an Airstream and the world on a cruise ship .His and Linda’s most memorable cruise was circumnavigating South America and the Amazon. He is survived by his wife Linda Keutzer of Peru, son Dirk ( Dwayne Ward ) Yuill of Geneva, daughter Ginger ( Bill ) Clark of Sandwich, two grandchildren Alex and Austin Clark, one sister Helen Danelson of N. Carolina , two brothers Clem ( Beverly ) Yuill of Batavia and James ( Pearl ) Yuill of Marseilles, and several nieces and nephews. Desiring to be of service to medical science he donated his body. A memorial visitation in honor of Robert “Parr” will be held at the Trinity Church United Methodist , 2505 Boomer Lane, Yorkville, IL on Sunday, July 16, 2017 from 1:00-3:00p.m. with a memorial service at 3:00p.m. with Reverend Michael Stoner officiating. In lieu of flowers, memorials may be directed to the Trinity Church United Methodist or Wayside Cross Mission Aurora, IL. www.waysidecross.org Family was assisted by the Beverage Family Funeral Home Sandwich, IL. www.beveragefamilyfh.com
To order memorial trees or send flowers to the family in memory of Robert Parr Yuill, please visit our flower store.