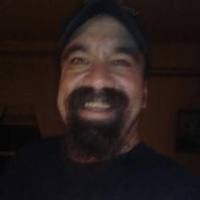 Dominick C. Molenda, age 52, of Springfield, MO, formerly of Ashton, IL, passed away Saturday April 15, 2017. He was born May 25, 1964 in Chicago, IL to Stephen and Donna (nee Palandri) Molenda. Like his father, Dominick enjoyed working with his hands whether on woodworking projects or as a handyman in his community. He owned his own company, Dominick’s Construction and Handyman Services, specializing in roofing and was easily recognizable in his big red truck. Dominick also enjoyed building model cars and collecting Matchbox cars. He was a fan of rock music, tattoos and loved riding his motorcycle with his friends. He was a strong man with a caring heart. He will be missed by many friends and his dear family. He is preceded in death by his paternal and maternal grandparents and his father, Stephen. Dominick is survived by his loving mother Donna Molenda and his siblings, Anthony Molenda, Dina (David) Nesemeier and Michelle (Michael) Cicchetti. Proud uncle to Dayna, Charlotte, Marissa, Mackenzie, Orrey, Dawson, Riley and Caysen and great uncle to Ayden, Violet and Chancellor. And cherished by his many aunts, uncles and cousins. Visitation will be held Sunday April 23, 2017 from 2-6 p.m. at the Beverage Lyons Family Funeral Home 601 Richardson Ave. Ashton, IL. Funeral service will be held Monday April 24, 2017 at 11:00 a.m. at the funeral home. Interment will follow to Ashton Cemetery. www.beveragelyonsfamilyfh.com
To order memorial trees or send flowers to the family in memory of Dominick Craig Molenda, please visit our flower store.