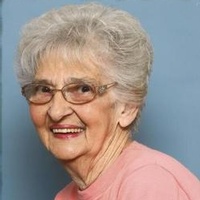 Jane Margaret Hagemann, 84 passed away January 2, at Hillside Rehab in Yorkville, Il and was a long time resident of Plano. She was born January 29, 1932 in Wilmette, IL to Joseph and Frances Kirscht. It was at the nearby Great Lakes Naval station that Jane met the love of her life, Donald, and later married him on March 19, 1949 in Chicago They shared 53 years together before Don’s passing in 2002. Jane retired from Western Electric after a long service and treasured many fond memories of all the great people in friendship. Jane’s pleasures were woodcrafting lawn ornaments, sewing , video poker machines, and cooking extra large batches of seasonal breads. Jane is survived by a brother Joe Kirscht of Beach Park, son, John (Ann) Hagemann of Plano, son-in-law Denny Todd (& his daughters Kelly and Jennifer) of Leland, 4 grandchildren; Michael (Michelle) Hagemann, Elizabeth (Dan Schuler) Solecki, Robert (Misty) Aters and Randy Aters, and 6 great grandchildren: Ayden, Collin, Samuel, Mackenzie, Tyler, and Teyen. She was preceded in death by her parents, husband Donald, sons Kenneth and Donald Robert, daughter Janet Todd and sister Evelyn Hill. A visitation and memorial service will be held Saturday, January 7th from 1 - 4 at Beverage Family Funeral Home in Sandwich. Jane will be cremated, and along with Donald, be laid to rest at Abraham Lincoln National Cemetery at a later date in a private service. The family wishes the sincerest thanks to the staff at Hillside Rehab and Kindred Hospice. www.beveragefamilyfh.com
To order memorial trees or send flowers to the family in memory of Jane Margaret Hagemann, please visit our flower store.