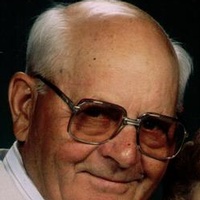 .Gertis D. Friday of rural Chana, IL. Fell asleep into the arms of his Creator in the afternoon of December 29th, 2016 after 101+ years of earthly life. He was at home with his daughter and his caregiver by his side. He was born May 13th, 1915 at the family home (at the time on the Johnson farm) in Marion Township, Ogle County IL. Except for the few years his family lived at Early Dawn in Lee County, he lived his entire life in Ogle County. The majority of those years in Pine Rock Township. He will be welcomed home by his parents Henry Otto and Helen (Adams) Friday; his wife of 67 years Margaret (Foss) Friday; his brother Carl (Eula Rasmussen) Friday; twin sisters Irene (Lewis) Champlain & Irma (Paul) Van Leuven; sister Harriette (Eugene) Steder; infant brother Henry Otto; brothers & sisters in law, Harry, Albert (Myrtle),Ray (Carolyn),Edgar, George (Dorothy), and infant Russell Foss; niece Judy Hays; nephew Larry Schier; numerous Aunts, Uncles, cousins and a host of friends. Gertis lovingly and generously supported his family, friends, neighbors, church and community. He was a 50+ year member of the Ashton Lions Club and served on numerous committees, and held several offices at his church. He was also a long time member of the Ogle County Farm Bureau. His occupation was farming, his hobby was hard work. He retired at age 85 after 60 + years of farming. Along with all of the hats he wore to be successful at his occupation, he also had a passion for painting. His love of painting began at the early age of 9 when he helped to paint the family barn it continued until the age of 95, when he painted the doors on the machine shed that he built in the 1950s, Many, many gallons of paint and varnish were spread by his brush on various structures in North Central IL. during the years between 9 & 95. In the years after retirement he enjoyed gardening, continued to mow the grass around the farm, and continued his life long war on weeds. He had finally “slowed down” enough so the rest of us could keep up to him. Even as his health declined, his sense of humor continued. Gertis is survived by three daughters: Doris Wunner of Tyler, TX, Evelyn (Jim) Worrell of DeKalb, IL, and Mary Lou Bill) Foster of Peoria, AZ. Six grandchildren: Scott (Kim) Wunner of San Dimas, CA, Doug (Christine) Wunner of Sycamore, IL. , Annette Wunner of Tyler, TX, Crystal (Jeff) Garvey of DeKalb, IL, David Foster of Las Vegas, Nevada, & Heather McCune of Goodyear, AZ. Eight great grandsons: Brenton & Justin Wunner of CA, Ethan & Colin Wunner of Sycamore, IL, Shaugnessy & Liam Garvey of DeKalb, IL, and Kade & Gage McCune of Goodyear, AZ He is also survived by his sister Esther Schier of Mt. Morris, IL and his sister Nancy Gould of Delevan, WI and several nieces and nephews and Munkhjargal “Mama” Tsevegjav who lovingly cared for him in his home for the last 1 ½ years. Funeral service for Gertis will be Friday Jan 6, 2017 at 11:00am at the Ashton United Methodist Church with Pastor Laura Crites officiating. Internment will follow at the Trinity Memory Gardens Cemetery, Rochelle, IL. Visitation will be from 10:00 am until the time of the service Beverage Lyons Funeral Home assisted the family. Memorials may be directed to Ashton United Methodist Church, Ashton Lions Club or a charity of the donor’s choice.
To order memorial trees or send flowers to the family in memory of Gertis Donald Friday, please visit our flower store.