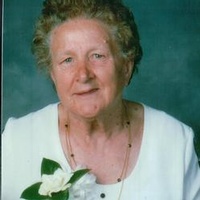 Luba Janusz died peacefully at home on 12/24/2016. She was born in Yaremki, Ukraine to Mickola and Sophie Bryjowska. She was happily married to Joseph Janusz until his death in 1987. She was a generous soul who loved to garden, sew, knit, and play bingo. She was also a great cook who enjoyed feeding everyone. She is survived by her daughters Olga (Dan) Bechtol of Steward, IL, Julie (Conrad) Danielewicz of Somonauk, IL, and daughter-in-law Debbie Hrycun. She is also survived by 14 Grandchildren, 19 Great Grandchildren, and several nieces and nephews. Luba was preceded in death by her parents, her loving husband Joseph, her beloved daughter Donna and son-in-law Frank, her beloved son Michael, two brothers, and five sisters. Memorial Mass St. Patrick Catholic Church 207 Kelly Drive Rochelle, Il 61068 Monday, January 2, 2017 at 10:00am Internment St. Nicholas Ukrainian Cemetery 8851 W. Higgins Road Chicago, Il 60656 Wednesday, January 4, 2017 12:00 noon
To order memorial trees or send flowers to the family in memory of Luba Janusz, please visit our flower store.