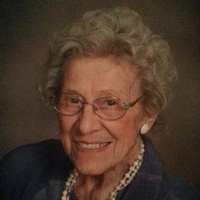 Marguerite D. Thomas, longtime resident of Rochelle, died peacefully at her daughter Jamie Thomas’ home in Sheboygan, Wisconsin on March 19, 2016. Daughter of Elmer G. and Olga (Binz) Davis, she was born in Rochelle on December 1, 1918 in the upstairs bedroom of her home. She graduated from Rochelle Township High School in 1937 and was a 1941 graduate of the University of Iowa with a degree in Commerce. She married James N. Thomas in June of 1942 in San Diego, California. After WWII, they lived in Iowa City and Traer, Iowa. After her husband’s death in 1948, she returned to Rochelle with her daughter Barbara and soon-to-be-born daughter Jamie. She received her Masters Degree in Social Science from Northern Illinois University in 1953 and taught typing, shorthand, U.S. History and World History at Rochelle Township High School from 1953 to 1981.Raising her two daughters alone, Marguerite (Mardi) was a strong, independent woman. As a well-respected member of the RTHS faculty, she touched the lives of countless students, many of whom kept in touch with her even up to the present day. She was unselfish, supportive, and generous, and loved a good game of cribbage! Marguerite was an active community leader and a key organizer of the local chapter of the League of Women Voters serving as president, co-president and board member. Her interest in history and her local community led to her involvement with the Flagg Township Historical Society where she served as president, secretary and board member. She served on the Rochelle Human Rights Commission as well as the Historic Preservation Commission and was a member of the St. Patrick’s Church Peace and Justice committee. She was honored for her civic service in many ways: “Write Women Back into History” Award—National Women’s History Project; “Unsung Heroes” Award; Rochelle Community Leader Award; LWV Rochelle—Award as Founder and Dedicated Leader: 1971-2001 ; Women of Achievement Award (state of Illinois)—2000, 2001; nominated for the Carrie Chapman Catt Award (2001).Marguerite had a way of getting people involved by prefacing her requests by saying, “Would you be willing to…..” She loved to travel both throughout the United States and abroad and was part of one of the first groups to visit China after it was opened up to the West. She especially enjoyed traveling with her two daughters on their yearly trips beginning when she was 80 years old.She was preceded in death by her husband James, father and mother Elmer and Olga, sisters Mary Orner, Gertrude Bain, Virginia Kelley and brother Elmer (Buddy).She is survived by her two daughters, Barbara (Jim) Wilmesmeier of St. Cloud, MN and Jamie (Joe Moore) of Sheboygan, WI, as well as grandchildren Paul (Kim) Wilmesmeier, Sarah (Aaron) Bergmann, Katherine (Nat) Stensland, Brian (Allison) Wilmesmeier, Ben Thomas-Moore, and Jerome (Jackie) Thomas-Moore, nine great grandchildren and thirteen nieces and nephews and their families. Funeral Mass will be celebrated Wednesday March 23, 2016 at 11:00 a.m. at St Patrick’s Catholic Church Rochelle. Visitation will be held Tuesday March 22, 2016 at the Beverage Lyons Family Funeral Home 704 N 6th St. Rochelle form 7-9 p.m. and 1 hour prior to mass at the church. Interment to follow at St. Patrick’s Catholic Cemetery Rochelle. In lieu of flowers, memorials are preferred to the League of Women Voters of Rochelle, the Flagg Township Historical Society, or the Marguerite Thomas Scholarship Fund at Rochelle Township High School. Beverage –Lyons Family Funeral Home entrusted to the funeral arrangements.www.beveragelyonsfamilyfh.com
To order memorial trees or send flowers to the family in memory of Marguerite D. Thomas, please visit our flower store.