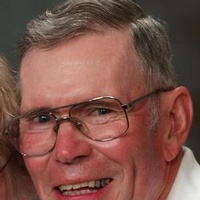 Reverend Martin Carrol Arni 79 of Leland passed away on March 10, 2016 at Valley West Hospital. He was born on July 25, 1936 in Marshall, Missouri to Rufus Eddy and Flora Mae (Barnes) Arni. He married Elizabeth Janco on June 20 1959 in Granite City, Illinois and spent the next 57 years happily married. He was a Minister at the 1st Church of the Nazarene in Sandwich until his retirement. He received his undergraduate at Olivet Nazarene University and then went on to complete his masters of Divinity degree with the Nazarene Theological Seminary. He loved to hunt, fish, and golf, watch baseball and gardening. Left to cherish his memories are his wife Elizabeth of Leland, his children; Janet (Don) Sommerville of Sugar Grove IL. Bruce (Beth) Arni of Geneva, IL., and Mark (Chris) Arni of Lancaster, OH. 13 grandchildren,1 sister Dora Alice (Carter) Shannon of Marshall, Missouri, 2 brothers; Marion Arni of Marshall Missouri, and Larry (Barbara) Arni of Idaho. He was preceded in death by his parents, and brothers; Rufus, Billy, Matthew. Funeral services will be held at the First Church of the Nazerene on March 14, 2016 at 6:00p.m. with Reverend Mark Abbott officiating. Visitation will be March 14, 2016 from 3:00 p.m. until the time of Service.In lieu of flowers family has asked that memorials be directed to Elizabeth in Memory of Pastor Arni. Arrangements entrusted to Beverage Family Funeral Home
To order memorial trees or send flowers to the family in memory of Rev. Martin Carrol Arni, please visit our flower store.

1st Church of the Nazarene

1st Church of the Nazarene