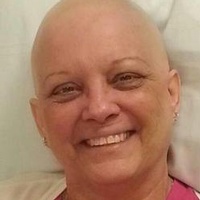 Donna Rae (Glover) Anderson, 59 of Somonauk, IL passed away on February 28, 2016 at her home with her loving family by her side. She was born on January 13, 1957 in Geneva Illinois to Louis and Patricia (Ruesch) Glover. She married Kevin Anderson on July 12, 1975 in Geneva Illinois and spent the next 40 years happily married. Donna’s biggest joy in life was her family , her children and now her grandchildren. Nothing was more important to her and Kevin than their family. She will be greatly missed She is survived by her husband Kevin, her children; Eric (Amanda) Anderson of Sapulpa, Oklahoma, Nicki (Quentin) Cather of Sandwich, Il. and Kristi (Eddie) Havlicek of Somonauk, IL, her7 grandchildren; Cameron, Kaden, Kaiden, Alexia, Callen, James and Gunnar, her mother Patricia Finnell of Earlville, her sisters; Debra Zimmerman, Lisa Rolling both of Earlville, IL and Susan (Jerry) Morganflash of Seneca IL., her brothers; Louis (Jessica) and Nathaniel (Charlyn) Glover, David, Paul and Chris Finnell, and step mother Louise Glover. She was preceded in death by her father Louis Glover Sr. Visitation will be held on March 3, 2016 at the Beverage Family Funeral Home in Sandwich from 4:00-8:00p.m. Funeral services will be held on March 4, 2016 at 11:00 a.m. at St John’s Lutheran Church in Somonauk, IL with Pastor William Weidenbach Jr. officiating. Interment will follow at Oak Mound Cemetery Somonauk, IL. Arrangements entrusted to Beverage Family Funeral Home www.beveragefamilyfh
To order memorial trees or send flowers to the family in memory of Donna Rae Anderson, please visit our flower store.