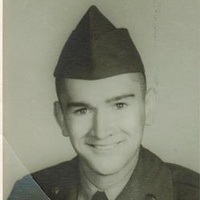 Carroll John Cooper 81, of Plano passed away December 23, 2015 at Willow Crest Nursing Pavilion. He was born on April 17, 1934 in Aurora, IL to the late John and Edith ( Baker ) Cooper. Carroll worked at the Big Rock Elevator hauling coal when he was drafted into the U.S. Army and was chosen and assigned to Enlisted Officers whom he proudly and humbly served in Berlin Germany. After returning from service he was employed as a painter. The can be remembered to be the guy who rode his bike all over Plano. He used to enjoy dancing and roller skating. Family would like mention his special friends, Bob & Eileen Biehl, Sheila and staff at BP Amoco gas in Plano. Special thanks to all his caregivers, Staff at Rush- Copley Medical Ctr. Alden’s rehab Willow Crest and the Sandwich VFW. He is survived by his sisters; Mable Sanman of St. Charles and Shirley A. Leadbetter of Aurora, IL. Brother George H. Cooper. His nieces, nephews, great nieces and nephews and his great great nieces and nephews. He is preceded in death by his parents, sister Alice Davis and 2 nephews. Services will be held Monday December 28, 2015 at 1:00 p.m. with a visitation from 11:00 a.m. till the time of service at the Beverage Family Funeral Home Sandwich, IL. Inurnment will take place January 4, 2015 at 11:00 at the Welch Cemetery Big Rock, IL. Memorials may be directed to the VFW, Salvation Army or the American Indian relief Council, Rapid City, SD. www.beveragefamilyfh.com
To order memorial trees or send flowers to the family in memory of Carroll John Cooper, please visit our flower store.