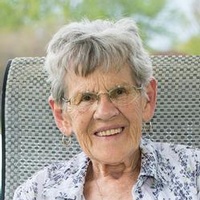 Genevieve Lenore Duffield Sanford, 87, of Sandwich, IL passed away on November 3, 2015 at Rush Copley Hospital in Aurora, IL. She was born on January 8, 1928 in Green Top Missouri to Lynn and Marjie (Martin) Myers. She was blessed with two special men in her life. She married Robert Duffield in Morris IL in 1955 and was married until his passing in 1966. She then met William Sanford and they were married in Plano IL in 1983, until his passing in 1985. She is survived by her children: Marjie (James) Schoolfield of Hinckley, IL. Roger (Kristin) Duffield of Somonauk, 1 sister Rose Nelson of Newark IL., and 1 brother Joe ( Carol ) Myers of Morris, IL. 6 grandchildren, Jason (Jodi) Schoolfield of Genoa City WI., Shannon (Scott) Sweeney of Naperville, IL, Matthew (Maggie) Schoolfield of Elburn, Nicholas Duffield of Somonauk, IL., Taylor Duffield of Chicago IL., and Amber Duffield of Somonauk IL., 7 great grandchildren; Madison, Maegan, Mary, William Schoolfield, Liam and Lily Sweeney, and Emma Duffield, and many nieces and nephews. She was preceded in death by her parents, 2 sisters Anna and Bettina and 1 step son Gary Duffield. Lenore was devoted to her family, loved her church, friends and music. She passed very peacefully just as she hoped with her family present. She was preceded in death by her parents, two sisters, Anna and Bettina and 1 step son Gary Duffield. Visitation will be held Sunday November 8, 2015 at the Beverage Family Funeral Home in Sandwich from 3:00 -7:00 p.m. Funeral services will be Monday November 9th 2015 at 10:30 a.m. at the Federated Church in Sandwich with Pastor Dan Dewitt officiating. Burial will take place at Oakwood Memorial Park in Ottawa IL. Memorials may be directed to the Federated Church in Sandwich Arrangements were entrusted to Beverage Family Funeral Home in Sandwich Illinois. www.beveragefamilyfh
To order memorial trees or send flowers to the family in memory of Genevieve Lenore Duffield-Sanford, please visit our flower store.